beta.62 brings with it a long-awaited, much-requested feature: TypeScript support! 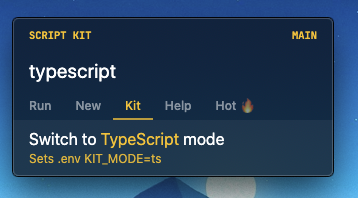 Each time your run a TS script, Script Kit will compile the TS script using esbuild to a JS script in a .scripts dir (notice the "dot"). The compiled JS script is then imported from there. Using .scripts as a sibling dir will help avoid any import/path issues. You can also write TS "library" files in your ~/.kenv/lib dir and import them into your script just fine.

If you're experienced with esbuild and curious about the settings, they look like this:

This also opens the door to exporting/building/bundling scripts and libs as individual shippable tools which I'll investigate more in the future.

2. Can I still run my JS scripts if I switch to TS?

Yes! Both your TS and JS scripts will show up in the UI.

When you create a new TS script, the generated script will start with the line: import "@johnlindquist/kit"

4. Where is the setting stored?

The fs-extra methods are now added on the global space. I found myself using outputFile, write/readJson, etc too often and found them to be a great addition. The only one missing is copy since we're already using that to "copy to clipboard". You can bring it in with the normal import/alias process if needed, e.g., let {copy:fsCopy} = await import("fs-extra")

You may notice running scripts from the Script Kit app that some commands you can run in your terminal might be missing, like "yarn", etc.